Women On A Roll and Women On The Net believe that BLACK LIVES MATTER, and we stand in solidarity with those who are suffering injustice and systemic racism.
We stand with those speaking out against a double standard for justice, striving for positive change, and invite you to join us. As we reflect on the assaults that have taken so many lives, it is clear it will take all of us to create the change needed to heal our country and ensure equality and justice for all.

Virtually THE place for women to connect with women!

In an effort to stay connected with our community during this time of physical-distancing,
Women On A Roll is proud to offer this online social experience!
Each interactive gathering will offer a unique opportunity designed to entertain,
connect, and socialize with women from all over the world!

Pull up a chair at the virtual table with your Thanksgiving leftovers, or whatever you’re having for dinner! Our conversation will begin with sharing what we are most grateful for and then who knows where it will go from there! The important thing here is that we come together as new and old friends, laugh a little, and give thanks! 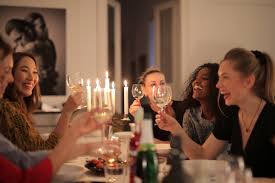 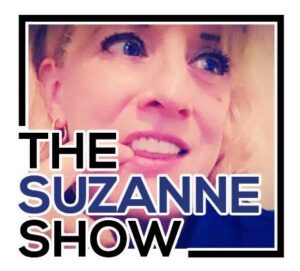 Women On The Net is proud to present Suzanne Westenhoefer’s new talk show! Get ready for laughs, news updates, in-depth interviews with some of your favorite celebrities, and much more!

Pamela Means, singer-songwriter with a penchant for protest songs, guitarist, vocalist, educator and social activist, is an Out and proud queer artist that cannot be musically contained. A conservatory-trained musician, Means also fronts her own jazz quartet, breathing life into classics once sung by Billie Holiday, Chet Baker and the like; performs the entirety of the album, The Beatles Abbey Road, solo acoustic, in celebration of its 50th anniversary, and now releases her tenth album, “Live at Northfire,” the first with new empowered trio, Pamela Means and The Reparations.

“Singer-songwriter and demigod, Pamela Means, is one of the fiercest guitar players and politically rooted [singer-songwriters] in the music industry today... With [Pamela Means Jazz Project Vol. 1] Means takes her rightful place among contemporary superstar jazz vocalists such as Cassandra Wilson and Norah Jones.” Curve Magazine 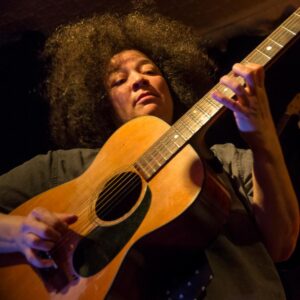 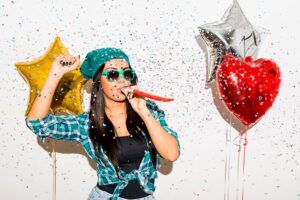 Our first day of the month soirée is open to everyone! We invite you to come inside and meet us! Whether you’re a returning guest or a first-timer, in a relationship or single, and where ever you live in the world, we welcome you! And expect a few celesbian sightings!

This is an opportunity to learn about us, the women who join us, and meet some of the performers being featured this month.

Upon arrival, we’ll gather in the main room, aka foyer. Grab a drink as we welcome you, introduce you to each other and to our our featured performers this month!

You’ll then be sent off to different rooms for an opportunity to socialize in small groups. This will be repeated many times during the party! Just like at a regular party, you’ll wander from room to room, enjoying new encounters along the way!

About the Speaker
Jill Schlesinger, CFP®, is the Emmy-nominated and Gracie Award Winning Business Analyst for CBS News, where she translates complicated business and economic news into understandable, relatable topics for everyday viewers and listeners. She covers the economy, markets, investing and anything else with a dollar sign on TV, on the “Jill on Money” podcast, radio (including her nationally syndicated show, “Jill on Money”, which won the 2018 Gracie Award for Best National Talk Show), the web and her blog, “Jill on Money.” Jill also won a 2018 Personal Finance Reporting Award from the Radio Television Digital News Association (RTDNA)/National Endowment for Financial Education (NEFE).
Prior to her second career at CBS, Jill spent 14 years as the co-owner and Chief Investment Officer for an independent investment advisory firm. She began her career as a self-employed options trader on the Commodities Exchange of New York, following her graduation from Brown University. Jill’s first book, The Dumb Things Smart People Do With Their Money, was published in February 2019 by Ballantine Books.

$5 or free for WOTN Members
CLICK HERE TO REGISTER 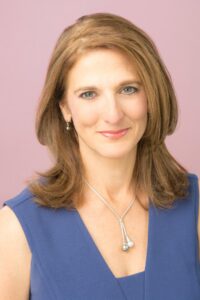 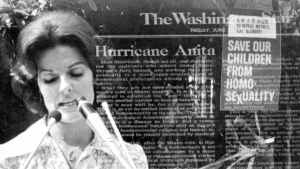 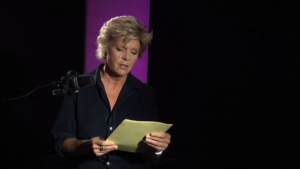 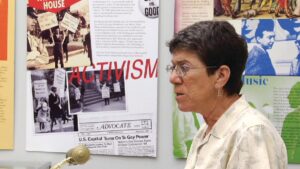 In the award-winning documentary LETTER TO ANITA, filmmaker Andrea Meyerson explores the painful legacy of singer Anita Bryant’s infamous anti-gay campaign of the late 1970s. Narrated by three-time Emmy-nominated actress Meredith Baxter, LETTER TO ANITA tells the story of Ronni Sanlo, a married mother of two who came out as a lesbian and divorced her husband, losing custody of her children as a result—an injustice that propelled Ronni into a life of LGBT activism.
Film Running Time: 55 minutes
Immediately following the screening there will a Q&A with the film’s subject, Ronni Sanlo, and filmmaker, Andrea Meyerson.

Pull up a chair around our virtual bar, share a toast to the start of the holiday season: Hanukkah, Christmas, Kwanzaa!

For those who’d like to participate in the Gift Exchange at The Secret Santa Holiday Party on December 23, you’ll be picking a number which will correspond with the recipient of your Secret Santa gift! When you choose your number we will immediately private chat you with the name that corresponds with that number. Keep it to yourself! Then, we’ll provide an opportunity to get to know each other during Happy Hour for everyone to get to know each other, including the recipient of your gift!

After this event, I’ll send each of you an email with the full name and mailing address to send the gift to. Then, we’ll all meet at The Secret Santa Holiday Party on 12/23 and open our gifts at which time your Secret Santa may or may not reveal herself!

Everyone is welcome to attend this Social Happy Hour even if you don’t want to participate on The Secret Santa Holiday Party on Wednesday, December 23. 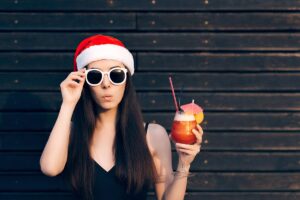 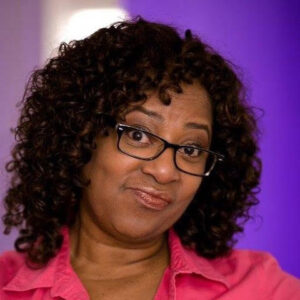 On a dare from an acting coach, Roz Browne hit the stage at a local comedy club over 20 years ago and hasn’t come down since. She performs at national concert and club venues and abroad for the USO. Her first national television appearance on BET’s Comic View made her an instant favorite with viewers. Audiences of all ages respond to her funny views on corporate America, marriage, travel and modern life. She was also the very first comedian to perform on The Laugh Factory stage at the Tropicana Hotel and Casino in Las Vegas, Nevada. Other highlights include appearances at Comic’s Unleashed, Funny Women of a Certain Age, the First Annual NoHo Comedy Festival, the Boston Comedy Festival, Toyota Comedy Festival, California’s Funniest Female Contest and her jokes have been included in the anthologies Joke Stew and Joke Soup.  She has also toured with The Merry Wives of Comedy production and 2 one-woman shows.

KATE RIGG is a mixed race multicultural, multilingual, multidisciplinary New York based stand-up comic, actor, and rabble rouser. She is a good Asian girl gone bad-ass. Kate is also the lead singer and lyricist for the award-winning music and comedy duo, Slanty Eyed Mama, who have performed at venues worldwide.

A graduate of the Juilliard school of Drama, Kate has won numerous awards from all over the world. Some of those awards are for being a groovy Asian and quick with a dirty joke.

Kate has starred in a bunch of plays in New York, on various TV programs such as New Amsterdam, Tales of The City, The Punisher, Law and Order, Family Guy, The Dr. Phil Show, LOGO’s One Night Stand-Up, Comedy Central’s Women in Comedy, to name a few. She has performed comedy everywhere from the Kennedy Center to the dryer section of a New York laundromat.

She is also the creator of several comedy based unscripted television competition shows. Since Covid hit she has also written and hosted online extravaganzas for the ACLU, Broadway for Biden, a 24 hour International Queer Arts Festival, and many more.

Kate’s one-woman shows have toured internationally, and her most recent full length comedy and music extravaganza “Zombie Asian Moms” was recorded live in New York City last year and will be released as a feature concert film next year.

$10 or free for WOTN Members
CLICK HERE TO REGISTER 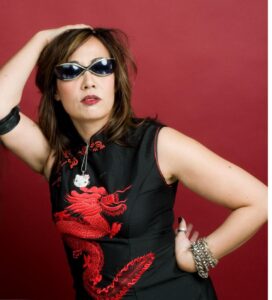 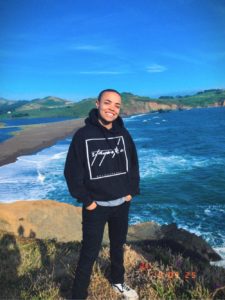 My name is Ashley Shine, I am a Coach, I am a friend, I am in constant search of being a better person and making the world a better place. I Coach, I create plans that help guide and support people in the directions they want to go. I am a student. I am a student at Colorado State University in hopes of getting a degree to help fight the social injustices in the world. I am also a student of life and all that comes with that. There is a lesson to be learned through every single interaction. I never want to stop being a student, I don’t ever want to be an “expert” I want to have the mindset to learn as much and teach as much as I can from a genuine and present place. My core purpose is to make the world a better, more compassionate, and more empathetic place for everyone. I have been a strength and conditioning coach for about four years, I focus on individual design and programming as I believe it is the best and most sustainable way to train. In our workout we will start with a 15-minute warm-up then workout for 25 to 30 minutes. It will be body weight movements and modifications will be given at every class. I am excited to work with you all.

2. Choose for Mac or PC and follow instructions for downloading.