The Los Angeles Premiere of CLAMBAKE!
Come and watch this very important part of our lesbian culture and history!
Advanced tickets available until Saturday, August 20th at midnight.
Box office opens at 4pm on Sunday, August 21st for walk-up ticket sales.
After this screening, Andrea will be touring to exhibit CLAMBAKE in film festivals in Palm Springs, Atlanta, Tampa, Fort Lauderdale and Rehoboth Beach! And a few more not finalized yet!

Please join us for this red-carpet event. A night like none other…
Meet the special guests of our Los Angeles Premiere

Meet the cast of CLAMBAKE (in order of appearance)
Kate Clinton 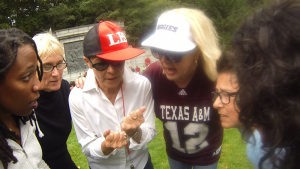 The year was 1984. A handful of entrepreneurial women innkeepers in Provincetown, Mass. gathered together with a mission: to figure out how they could entice summer guests back during the seaside town’s offseason. Without the luxury of social media, or even email, the women hand-wrote letters to all their past guests, inviting them to come enjoy the beautiful autumn scenery—with a clambake and some local entertainment thrown in. They called it “Women’s Weekend,” and over the next three decades, it spawned numerous other lesbian gatherings in Provincetown, expanding from modest grassroots beginning to eventually become one of the most popular lesbian events in the world.

CLAMBAKE, an exciting new documentary from award-winning filmmaker Andrea Meyerson, charts the growth of Women’s Week in Provincetown, from its inception to becoming the thriving lesbian mecca it is today. The film takes viewers on a fascinating 30-year journey, through archival footage and photos, interviews with celebrities and founders, and current events and performances, offering a historical—and hysterical—look at what a handful of innovative women can accomplish.

Here’s what Curve Magazine magazine had to say:
www.curvemag.com/Events/Must-See-Documentary-Clambake-Is-Coming-To-LA
EVENT DETAILS
OPPORTUNITY DRAWING
We will be offering an opportunity to win a FREE trip to Women’s Week in Provincetown, October 10-16, 2106!
Tickets will be available at the event:
One Ticket: $10
Three Tickets: $25
Ten Tickets: $50
Winner will be announced at the After Party!
LOCATION
The Renberg Theatre & Courtyard
1125 N McCadden Place
Los Angeles, CA 90028

For more information about the film, visit www.clambakethemovie.com