Originally Published by Curve Magazine on 2/11/13.

The Women On A Roll founder reminds us why laughing matters. 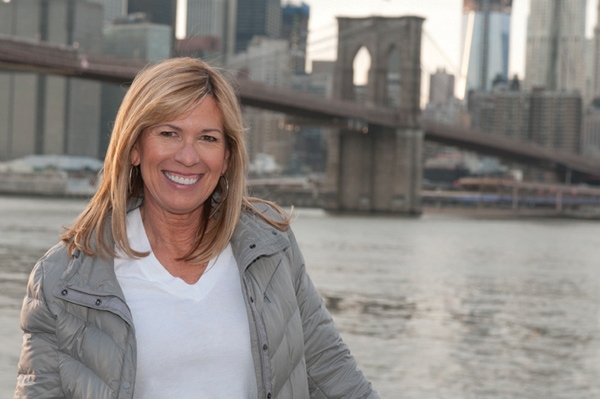 We catch up with pioneering filmmaker and LGBT mover and shaker, Andrea Myerson, who was recently applauded by Pride of the Ocean festival programmer John Scagliotti for her “creative cinematic approach in presenting the many faces of the LGBT community.”

What prompted you to start Women On a Roll?
My production career actually started in 1995 when I founded Women On A Roll (WOAR). I had come out several years earlier and was a bit discouraged by the offerings within the lesbian community. Other than bars and softball, there were few options for women to connect. I have always been an avid bicyclist so I decided to start organizing bike rides with socializing opportunities. WOAR grew rather quickly and within six months we were offering lots of social, cultural and sporting events and hundreds of women were attending. In 1996 WOAR added travel to its offerings. I became extremely passionate in serving the LGBT community.

You founded StandOut Productions in 1997, and filmed Laughing Matters in 2002 and three sequels. What is your connection to stand-up comedy?
In 1997 I decided to throw caution to the wind, left my corporate gig and launched StandOut Productions. Initially he company’s mission was to produce fundraisers for LGBT nonprofit organizations. And we did lots of that! In fact, StandOut Productions has raised over one million dollars collectively with our fundraising efforts. I soon realized another void in the community—entertainment that was geared to our community. It seemed every live show and movie I went to was always about straight people. I wanted to offer shows that were about us, by us and for us! So, I started producing standup comedy shows and concerts. Initially it was primarily with lesbian performers but eventually, it expanded to all LGBT performers. I wanted to offer the community a theater experience that represented our voice! So, I started producing shows and booking great talent which included Kate Clinton, Suzanne Westenhoefer, Karen Williams, Marga Gomez, Vickie Shaw, Michele Balan, Cris Williamson, Indigo Girls and k.d. lang and many more. I would rent beautiful venues to stage the productions and we would fill 800- to 3,000-seat theaters.

Tell us why laughing literally matters.
When Ellen and Rosie came out, I, like everyone in our community was ecstatic. But it seemed that the entire world thought they were the only lesbian comics. I was extremely involved with Outfest: LA Gay & Lesbian Film Festival and after the festival in 2001, I decided to make a documentary to pay tribute to the lesbian comics who were out from day one. and as long as 20 + years.  After spending years producing live shows with these women, I wanted to showcase their talent and share their inspiring stories. I truly feel they never received the same level of fame because they were always out. Their honesty on and off stage was so commendable and courageous  and I wanted to celebrate that. I had never made a film before so it was an extremely challenging project. But we completed it in one year and Laughing Matters premiered in 2002 to a sold out audience at The Castro in San Francisco at Frameline. The following month it played in Outfest where we won the Audience Award for Best Documentary. I was and continue to be very grateful to Kate Clinton, Marga Gomez, Suzanne Westenhoefer and Karen Williams for trusting me to tell their compelling stories.

I continued producing live shows and felt it was time to create another film that focused on the out lesbian comics who benefited from the trailblazers who were featured in the first film. In 2006 I completed Laughing Matters…More! featuring Rene Hicks, Elvira Kurt, Sabrina Matthews and Vickie Shaw. I wanted to be sure to include the journey gay men’s comedy and in 2007, I completed Laughing Matters…The Men. And finally I kept meeting young up and coming comics  who made the choice to be out onstage and found their story interesting enough to make Laughing Matters…Next Gen in 2008.

I also made a documentary about Kate Clinton’s 25th Anniversary Tour in 2006 because at that time there was no other gay or lesbian comic who had been performing out and proud for that long. This was part of our LGBT history and I wanted to document it. I think I’ve always been connected to comedy because it’s so important to laugh. It gives us power and definitely makes the struggles we have encountered to obtain equal rights a little easier.

Out of the 27 films you’ve produced and directed, which are your favorites and “must views” for lesbians?
I can’t say I have a favorite—I mean they are all my babies! I like them all for different reasons. I LOVE when younger lesbians watch my earlier work, Laughing Matters and Laughing Matters…More because I think it’s really important to know about our journey. I am currently touring with my newest documentary, I Stand Corrected and I am extremely proud of this work. It took me five years to complete it and the subject of the film, Jennifer Leitham is someone everyone should know! Her beautiful spirit, extraordinary talent and raw honesty allows the audience to share her extraordinary journey. 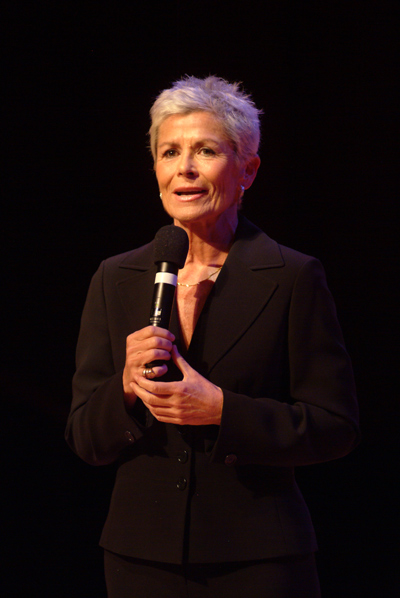 You’ve won awards both for entertainment and activism. What is the connection between the two, and how can lesbians in the entertainment industry change the hearts and minds of mainstream audiences?
Great question. I guess the connection is that I’m focused on doing films that serve the LGBT community and document and preserve our stories. I really think this is my calling and I’m doing exactly what I’m supposed to do with my life.  What’s great about being in the entertainment industry, especially creating TV productions and films is that you can really reach a lot of people for an indefinite amount of time. Before I got involved in film production, I would produce live shows regularly. The difference is you can only reach the amount of people who attend the show — maybe 1,000 or 2,000 people for that one night only. When I produce a film, it lives forever and reaches millions of people. My goal is to always find a way to share my work with LGBT and straight audiences alike. We are achieving that with “I Stand Corrected” and that makes me very happy! Even within our own LGBT community, I find we have a lot to learn about each other!

How and when did you become involved with Pride of the Ocean?
I was an invited guest on their Bermuda Cruise last year. I had just completed I Stand Corrected and submitted it for their consideration. It was accepted and shown on the cruise.  I met the most amazing people on that trip and loved the concept of a film festival at sea.

What is a Pride of the Ocean cruise like, and how does it differ from lesbian cruises
Well, the main difference is that there are gay men on the trip, which is wonderful. You haven’t truly had a gay vacation until you travel with a group of fun gay men! The amount of men and women attending was pretty equal. You have the option to attend all the screenings and workshops or just do your own thing. And you get to meet and mingle with the filmmakers throughout the trip. I liked it so much, we are offering it as a Women On A Roll trip this year! So, there will be lots of ladies on board! And of course, I am honored to chosen as the recipient of their Body of Work this year.

What’s coming up for you in 2013?
I just wrapped production on a short film that will be playing in film festivals. I’m very excited about it because it’s the first narrative I directed. It’s called Seamless and it’s extremely funny! It’s written by and Matthew Moore and stars Carlease Burke (Shameless, In Her Shoes) and Mindy Sterling (Austin Powers, Groundlings). I also started another documentary last year and hope to complete it before year end. It’s called Family Untied and it focuses on the Florida laws during the years Anita Bryant’s anti-gay campaign was in full force. Ronni Sanlo, an activist is the subject in which the story is told. She lost custody of her two children when she came out as lesbian in Florida in the late ’70s. It will be narrated by Meredith Baxter.