Andrea Meyerson Has Dedicated Her Career To Celebrating Queer Women 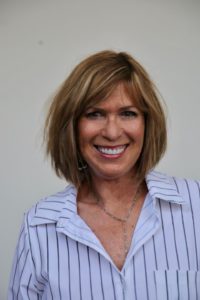 Andrea Meyerson has devoted her life to the celebration of queer women. Whether she is taking queer women on trips around the world or producing award-winning movies and television shows on the contributions queer women have made, she is determined to carve out as much space for them as possible.

In 1995, Meyerson founded Women on a Roll (WOAR), a social organization for lesbians based in California. Meyerson had recently come out of the closet after divorcing her husband and was struggling to find activities that would allow her to meet other gay women. All she could find were bars and softball teams, she says, and neither were her thing.

So, she started a bike club, and at the very first meeting, forty women showed up. It only grew from there, and it didn’t take long for Meyerson to realize she was onto something.

Queer women, Meyerson observed, were craving more opportunities to socialize. She turned WOAR into a membership club and began planning all sorts of events, like dinner parties, museum visits, nights out at the theater, and holiday parties.

Two years later, as WOAR continued to grow in popularity, Meyerson quit her corporate job to focus on serving her community full time. “I liked my job, but I just didn’t care about doing it anymore,” she says. “Something hit, like this isn’t what I’m supposed to be doing.”

With more time to devote to WOAR, Meyerson added a travel component. Women could now sign up to take trips. Today, it has evolved primarily into a travel company. Meyerson takes members all over the world, from South Africa to Greece to Women’s Week in Provincetown, Massachusetts. “It’s a really rewarding thing to bring women together and see them experience these once in a lifetime opportunities,” Meyerson says.

When she quit her job, Meyerson also founded StandOut Productions (name will soon change to Andrea Meyerson Productions). For a while, StandOut produced fundraisers, and Meyerson facilitated raising millions of dollars for LGBTQ nonprofits. Through this experience, she met many LGBTQ celebrities and took a special interest in comedians after realizing how few opportunities there were for out women in comedy to perform.

In the late nineties, out women comics were not allowed to perform at many comedy clubs, so Meyerson sought them out in coffee shops and bars and began producing comedy shows and concerts at large theaters.

When Ellen DeGeneres and Rosie O’Donnell came out publicly, becoming instant LGBTQ icons, Meyerson couldn’t help but feel that the women she had been working so hard to prop up were being left behind.

“The whole world acted like there were only two lesbian comics,” she says. So Meyerson decided her production company would make a movie to celebrate the out women of comedy she knew.

“I wanted to pay tribute to who I considered the pioneers of being out lesbian comics…Yes, Ellen and Rosie came out and we’re grateful they came out and that is one journey, but these women who are just as talented never reached that level of fame because they were out from day one.”

This led to Meyerson’s first film, Laughing Matters, a documentary about lesbian comics, which she both produced and directed. The film premiered to a 1400-seat sold out Castro Theater. In addition to other awards, it won the Outfest Audience Award and was named Best Lesbian Film at the Q Cinema LGBTQ Fort Worth International Film Festival.

She has since produced and directed more than thirty television specials, feature films, and series episodes. Her projects include Letter to Anita, a documentary about Anita Bryant’s anti-gay campaign, Clambake, a history of Women’s Week in Provincetown, and television comedy specials featuring comedians like The L Word’s Kate Clinton and The Late Show With David Letterman’s Suzanne Westenhoefer.

For Meyerson, chronicling the history and culture of queer women is vital. “I don’t believe in dwelling on anything negative, but I do believe in being proud of our journey,” she says.