Andrea Meyerson will moderate a conversation with author Barbara Schoichet about her newly released book: DON’T THINK TWICE.
There will be a wine reception immediately following the Q&A and book reading. 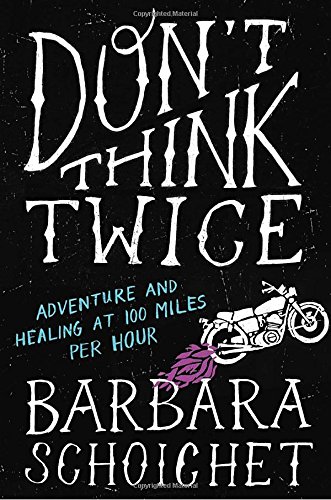 DON’T THINK TWICE
Adventure and Healing at
100 Miles Per Hour
At the age of forty-nine, life sucker-punched Barbara Schoichet. She had a great job working for a major Hollywood studio, a girlfriend she adored, and a family she cherished. But within six months, it all came crashing down. She lost her job in a merger, her girlfriend left her for her hairdresser a week later, and her mother died within four days of receiving a cancer diagnosis. She was grieving on so many levels she didn’t know who she was. But as Barbara discovered, losing your identity can be a way to find out who you really are. So shortly after turning fifty she took motorcycle lessons, bought a Harley on eBay, and flew from Los Angeles to New York to ride it home-alone-a journey she chronicles in her funny, irreverent, and moving memoir, DON’T THINK TWICE: Adventure and Healing at 100 Miles Per Hour (Putnam; September 6, 2016).To learn more about the book, click here: www.penguinrandomhouse.com/books/529767/dont-think-twice-by-barbara-schoichet/
Advance Praise for DON’T THINK TWICE

“If you’re yearning for a wild ride of an adventure, as well as a jolt of heartening life philosophies, don’t think twice about making Don’t Think Twice your next read. You will not regret it!”
-Diana Nyad, world champion swimmer and author of Find a Way

“Finally, a road trip-dangerous, exciting, and illuminating-taken by a woman, and on a motorcycle! Yesss! This is inspiring to those of us who can’t but who wish we could.”-Jane Juska, author of A Round-Heeled Woman

“Vivid and honest, Don’t Think Twice is as fresh as the wind on your face. Reading this book will remind you that just when you think you’ve hit the end of the road, it’s time to set out to discover a new path for your life.” -Diana Bletter, author of A Remarkable Kindness